DAYTONA BEACH, Fla. (Feb. 13, 2014) - Daytona State College student Juaquin Trumpet wants to one day be regarded among the best violinists in the world, and it looks like he’s headed in the right direction.

Competing against 10 other string instrumentalists in his division, Trumpet, 19, won for his performance of Henryk Wieniawski’s Scherzo-Tarantelle, Op. 16.

“It was an impressive performance of what is considered a highly technical piece, especially considering that Juaquin just picked up the violin seven years ago and has been self-taught until he began his formal instruction at the college two years ago,” said Peter Waidelich, director of instrumental music and assistant chair of the Mike Curb College of Music, Entertainment and Art at Daytona State. 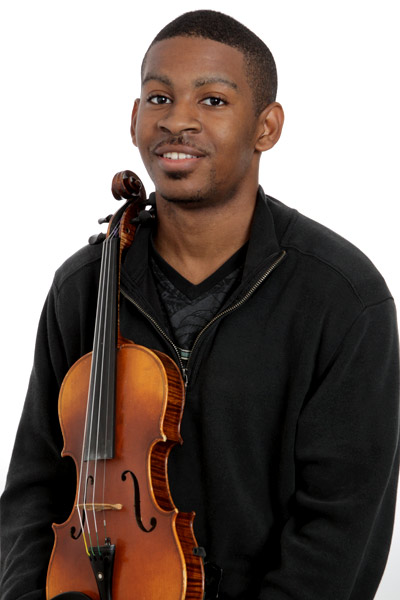 With his win in the string division, and upon earning his associate of arts degree from Daytona State, Trumpet will receive a music scholarship of $1,000 per year for two years from a participating college or university that is accredited by the National Association of Schools of Music.

“I hope to transfer to Stetson after DSC,” he said, “but after that, I only know that music will be my main thing.”

Trumpet is a graduate of Colonial High School in Orlando. Upon earning his diploma, he enrolled at Daytona State where he found the tuition to be affordable and had family living in the area.

While he plays multiple instruments, he said his first choice is the violin. Similarly, he’s keeping his options open as far as his future career is concerned. “I’d like to become a professional musician, a composer or a teacher, maybe get some of my music published,” he said. “I’m interested in film scoring, too, and have an idea for a movie.”

MORE: Offering more than 100 certificate, associate and bachelor’s degree programs, Daytona State College is the leader in education and workforce training needs of Volusia and Flagler counties and beyond for more than 60 years. The College enrolls nearly 25,000 students a year at its seven instructional sites, with graduates serving in critical fields including healthcare, emergency services/public safety, business, education, hospitality, engineering, technology, digital media, and more.

Daytona State has been recognized as a leader in higher education numerous times, consistently by U.S. News & World Report, which ranks the College among the Top Tier Best Online Bachelor’s Programs. The U.S. Department of Education’s College Affordability and Transparency Center has ranked DSC among the top 50 most affordable public four-year institutions in the country, with less than half the tuition of the national average. Community College Week, a leading publication in higher education, annually continues to feature the college in its list of Top 100 Associate Degree Producers. And U.S. News & World Report has ranked DSC among its Top Online Bachelor’s Programs for Veterans multiple times.

A Member of the Florida College System